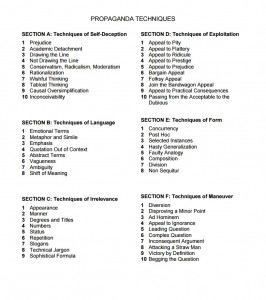 Quote from 1980 presidential debate between Carter and Reagan:

Reagan: “Next Tuesday is Election Day.  Next Tuesday all of you will go to the polls, will stand there in the polling place and make a decision.  I think when you make that decision, it might be well if you would ask yourself, are you better off than you were four years ago?  Is it easier for you to go and buy things in the stores than it was four years ago?  Is there more or less unemployment in the country than there was four years ago?  Is America as respected throughout the world as it was?  Do you feel that our security is as safe, that we’re as strong as were four years ago?  And if you answer all of those questions yes, why then, I think your choice is very obvious as to whom you will vote for.  If you don’t agree, if you don’t think that this course that we’ve been on for the last four years is what you would like to see us follow for the next four, then I could suggest another choice that you have.”

Quotes from a 2008 presidential debate between McCain and Obama:

McCain: “The USA , Tom, is the greatest force for good, and we must do whatever we can to prevent genocide… That requires a cool hand at the tiller.  That requires a person who understands what the limits of our capability are.”

McCain’s closing argument: “And I’m asking the American people to give me another opportunity and I’ll rest on my record, but I’ll also tell you, when times are tough, we need a steady hand at the tiller and the great honor of my life was to always put my country first.”

Quotes from 1980 presidential debate between Jimmy Carter and Ronald Reagan:

Carter: “Governor Reagan, as a matter of fact, began his political career campaigning around this nation against Medicare.  Now we have an opportunity to move towards national health insurance, with emphasis on the prevention of disease, an emphasis on outpatient care, not inpatient care, an emphasis on hospital cost containment, to hold down the cost of hospital care for those who are ill, an emphasis on catastrophic health insurance, so that if a family is threatened of being wiped out economically because of a very high medical bill, then the insurance would help pay for it.  These are the kind of elements of a national health insurance important to the American people.  Governor Reagan again, typically is against such a proposal.”

Reagan: “There you go again.”

“I’m here today because I’m concerned about women’s rights.  I don’t have to tell you the danger to Roe vs. Wade under our opponents’ policies.  But I’m here today because I’m very concerned about the continuing disparity in wealth between our best-off citizens and our everyday citizens.  That’s a disparity that I believe our honorable opponent’s policies will only increase, and that threatens to divides us into two distinct and foreign nations.”

Quotes from conversation on fivethirtyeight.com about the Democratic presidential nomination race:

Micah: All right, so let’s posit that the tightening of the race in Iowa and the nation is real and lasting.  Sanders leads in New Hampshire.  Is Sanders a real threat to win the nomination now?

B: Do you know who Jimmy Butler is?

My conservative record of leadership and results is a clear contrast to @HillaryClinton. pic.twitter.com/yUNIBW2EWn

The concept of global warming was created by and for the Chinese in order to make U.S. manufacturing non-competitive.

Interview before the Super Bowl:

Deion Sanders: Does it bother you all the attention and they want you to talk when you really don’t?

Marshawn Lynch: I’m just here so I won’t get fined.

Jack: Now that we are at Universal Studios we have to go check out the Hulk.  It’s their sickest roller coaster.

Diane: I think i’m just going to check out Harry Potter World and not go on any of the rides.  I heard that on average there are 4.5 amusement park ride-related deaths per year, and I don’t want to be turned into a statistic.

Quote from news article: “Ronald Crump got in an argument with one of the audience members at a campaign stop in Des Moines.  He was upset that racist language was being used.”

Parent:  Your homework isn’t going to do itself.  Either you can do your homework tonight or I’m going to delete Candy Crush Saga from your Ipad for a week!

I can’t believe you’re saying that you’re a better Equations player than me.  The only reason you beat me in the championship is I set a goal with an 8 when Base 8 was called.  In all of the other shakes I had a higher score.

It stinks that we showed up fifth for the Black Friday deals at Walmart and they only awarded the best deals to the first four in line.  Well every cloud has a silver lining.  Almost every year you hear about someone seriously injured trying to get those deals.

There’s no way I’m voting for DN for president.  He uses a lot of tough rhetoric but his bark is worse than his bite.  I don’t want to see someone elected who’s going to slobber on everything in the Oval Office.

Hey what’s up?  I am going to post prop questions here from this year’s sections to help everyone get ready for this year’s competitions.  Look for notifications on Twitter when a new question is posted.

This Presidents clue could be about Thomas Jefferson or John Adams based on the fact that they were both on the Committee of Five.  Since I don’t know which one it is, I’ll just wait until the four point clue.

Mother:  I can’t believe you want to go to the Justin Bieber concert; he makes the worst music in human history!

Son:  I know you grew up listening to Mozart perform live but I don’t think you could tell the difference between Justin Bieber and One Direction these days.

Sales representative at meat counter in grocery store:  “It sounds like you’re trying to decide between the rib-eye and sirloin steaks.  Our rib-eye cut looks especially juicy today, so I’m guessing it would be the more flavorful choice.  The sirloin is looking a little bit darker than usual which means that it will be a bit tougher, but it also is at a lower price.  Which do you want to go with?”

Graduation speech by McDonalds CEO: “Four score and seven lattes ago, I had the idea that everyone should be able to get coffee quickly and for an affordable price at McDonalds restaurants.”

Answer: 4, Quotation Out of Context

President of the US: “The House Democrats want the budget for NASA to be $25 billion dollars in 2016, and the House Republicans want it to be $15 billion.  Unless we can reach a consensus, we will never be able to pass a budget bill.  I propose that we make NASA’s budget for 2016 $20 billion dollars.”

Question during Stanford interview of college applicant: “I see that you visited our campus last April.  What do you like about Stanford?”

Starbucks corporate memo sent to stores: Around 10% of our customers don’t celebrate Christmas; therefore, our store employees should say “Happy holidays” instead of “Merry Christmas.”

Quote from presidential candidate Bernie Sanders: “Do I consider myself part of the casino capitalist process by which so few have so much and so many have so little, by which Wall Street’s greed and recklessness wrecked this economy?  No, I don’t.  I believe in a society where all people do well, not just a handful of billionaires.”

Conversation between two people at the gym: Bob: Alright we’re almost finished with our 30 minute run, let’s hit the showers.

Jillian: Hold on, let’s go an extra five minutes.  If we work out for a longer duration, the workout will have a greater impact on our fitness level.

Answer: 4, Not Drawing the Line

Interview with CEO Martin Shkreli of Turing Pharmaceuticals after they raised the price of Daraprim from $13.50 to $750:

Interviewer: You’re in favor of free markets, I assume.

Interviewer: Why do you think the drug was priced at $13.50 before.  Somebody thought that was the right price for this drug.

Shkreli: Yea, if you look at drugs like Sovaldi, for instance, Daraprim is less expensive than Sovaldi, despite the fact that it treats a disease that’s far more severe and far less common.  So if you think about free markets and fair price, it’s pretty clear that Daraprim was not priced appropriately.

Ad in Google store: The Soul Reader poker app on Google Glass will point out the smallest twitches that your opponent makes and help you determine if they’re tells.  When your opponent check-raises all-in on the river now you’ll be able to tell if they have the nuts or if they’re just plain nuts.  Your adversaries better bring their sunglasses.

Ad: Vote for Kanye West; he puts the party back into Democratic Party.

Quote from presidential candidate Carly Fiorina at the December 15th Republican Party debate, regarding terrorist attacks: “We have a lot of argument about laws but none of it solves the problem.  Let’s examine what happened, why did we miss the Tsarnaev brothers?  Why did we miss the San Bernardino couple?  It wasn’t because we had stopped collecting metadata — it was because, I think, as someone who comes from the technology world, we were using the wrong algorithms.”

In a press conference after the Detroit Pistons beat the Philadelphia 76’ers by 10 points, coach Stan Van Gundy answered questions:

Stan: I was very proud of how our starters played tonight.  Our starters did a great job putting more points on the board than the other team when they were on the floor.

Rod: So you weren’t happy with how your backups performed tonight?

In a game of football, Ryan sat on the sidelines pouting while he was replaced by Brian, who led the team to victory.  Our corporate policy is that you always support your team, no matter what.  I don’t think we should hire Ryan for a management position at State Farm; he is too unlikely to be a team player at our firm.

Teacher: What character or characters is the title referring to?

Stu: I have no idea.

Teacher: I thought you said you read the book.

Stu: You told us to read “To Kill a Mockingbird” over break, and I did.  *Points at book cover* See, I just read it again!